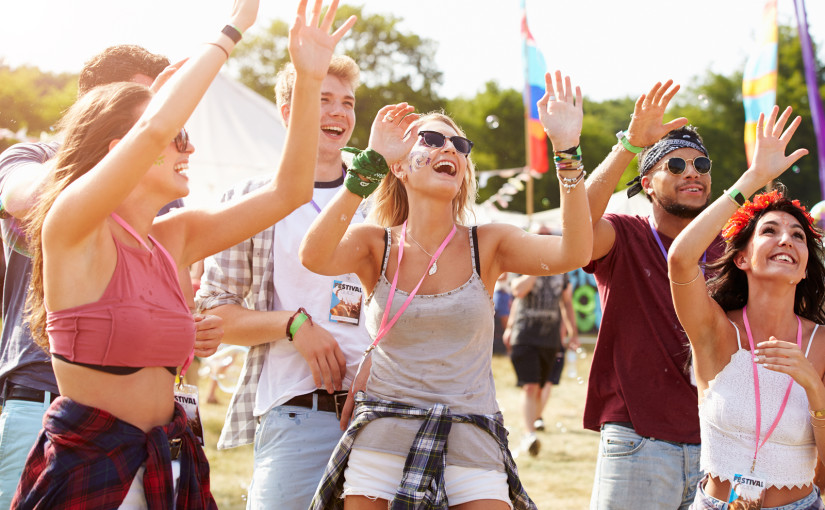 How many skips does festival waste fill? How many tonnes are produced? Is it recycled? Do our beloved UK music festivals have initiatives in place to improve on their environmental impact? We have investigated to bring you all the facts and figures.

People attend music festivals to have a good time, and perhaps escape everyday life for a few days, but have you ever stopped to think about how much waste is produced by these festivals – some of which are so big they are essentially a large temporary town? Have you ever wondered about how much of the waste produced is recycled, or what green initiatives the festival organisers have in place to cut waste and litter? With the number of music festivals being hosted in the UK growing by 34 per cent in just four years, these are questions that need to be asked.

How are festivals trying to reduce and manage their waste?

Our research has led to us uncovering a vast array of interesting initiatives at music festivals, most of which are trying hard to improve on their green statistics from previous years, and lessen their environmental impact. We go in to detail about a few of these below.

Festivals are very keen to produce the least amount of waste possible, as they know they will suffer criticism if not. It has been found that half of festival-goers would happily pay more to attend a greener event, as opposed to an event known for its litter and waste problems. Also, most say “noise, waste and traffic have a negative impact on the festival experience”.

Some festivals – including Acoustic Festival and Larmer Tree Festival – recycle ALL of the waste produced onsite, meaning the waste which isn’t recyclable in the classic sense gets turned into energy, leaving nothing for landfill. 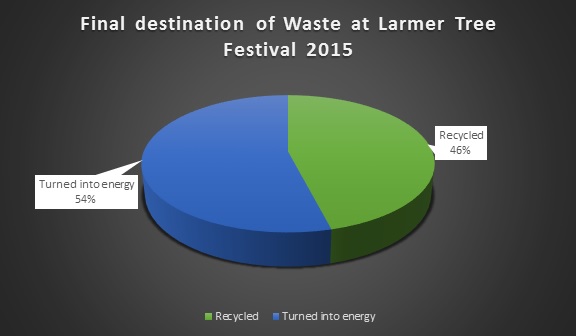 Cambridge Folk Festival recycled all but 2% of their waste in 2015, and are aiming for 100% recycling this year. They’re also hoping to recycle at least 50% onsite this year, as last year 36% of the sorting and recycling took place offsite, which uses more energy. 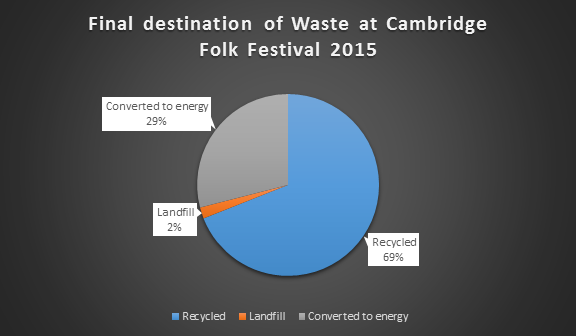 In 2014, Glastonbury Festival recycled 54% of the waste produced onsite. The graph below shows the breakdown of the recyclable waste types at the festival. 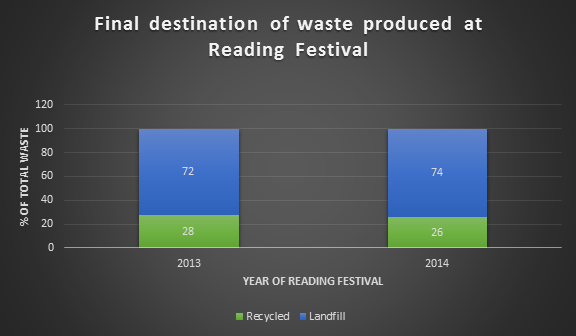 However, their sister festival –  Leeds Festival –  kicked Reading’s butt in 2014 and managed to recycle a healthy 82.4% of their waste! There was 13 times more waste recycled at Leeds Festival in 2014 than in 2013. 887 tonnes of waste were sent to landfill in 2013, with 54 tonnes being recycled. Then, in 2014 the tables turned dramatically, and 120 tonnes of waste was sent to landfill with 568 tonnes recycled. That is still 120 tonnes too much being sent to landfill, but certainly a step in the right direction, as shown in the chart below. 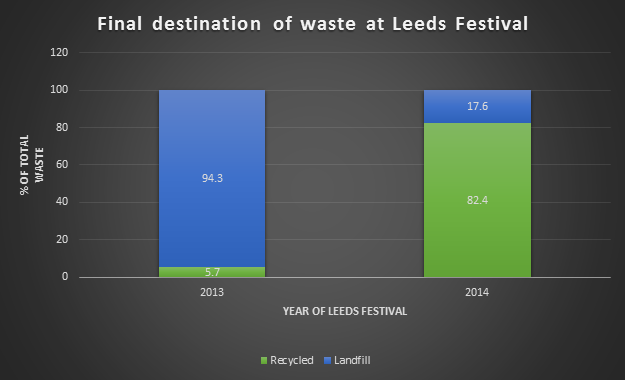 Some festivals issue rubbish bags to festival-goers on arrival, and add a charge to their tickets, which is refunded if a bag of rubbish is returned at some point during the festival. This aims to keep litter to a minimum, and keep rubbish off the floor where it can quickly impact on the local environment.

Cup deposit schemes are becoming increasingly popular and successful at festivals, where attendees only get their deposit back if they return the reusable cup they’ve been using. Stepping Stones Festival told us this tactic works really well for them, with many people taking the cups home as a cheap souvenir, and the majority of the rest being returned for the deposit. This way, none end up on the floor or in landfill.

All festivals seem to have increased the number of bins on site, which are clearly labelled with what they are for (general waste, plastic, paper, etc.) The problem seems to be bins overflowing with rubbish, as they are not emptied often enough. 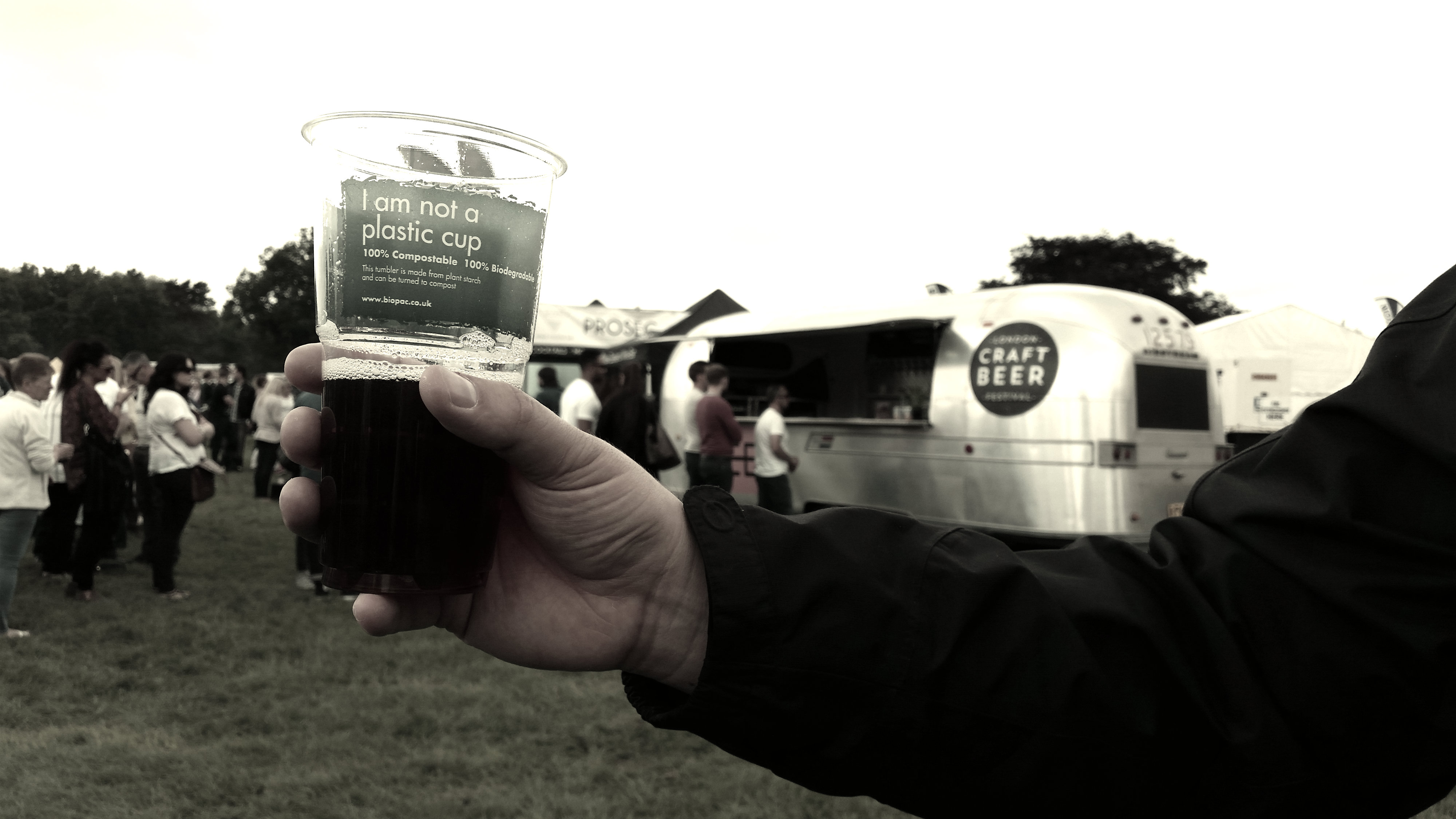 Plastic is often seen as the most evil of the recyclables – mainly due to the toxins it can contain, which can leach into the environment if the plastic becomes litter. Plastic is also not as easy to recycle as other materials, and therefore uses more energy. For these reasons, some festivals have cut plastic out of their disposable food and drink packaging altogether. Limetree Festival is this year going plastic-free, and will be providing free tap water throughout the festival, as well as encouraging festival-goers to take advantage of the natural spring onsite. As aforementioned, Glastonbury are this year giving out stainless steel drinks containers for a £5 deposit, in an attempt to cut their plastic bottle consumption: around one million plastic bottles are usually used and disposed of at Glastonbury each year!

Tents are a modern nightmare for the organisers of music festivals, thanks to a troublesome combination of  increasingly low tent prices, poor tent quality, and apathetic festival-goers. Some festivals, including Bestival, collect up the abandoned tents and donate them to humanitarian charities –  recycling them for others to use.

Interestingly, the Isle of Wight festival now features special ‘Love Your Tent’ camping fields, in which everyone signs a code of conduct when they arrive, agreeing to remove all of their belongings when they leave. And it works! In 2014, 1450 campers stayed in the designated fields, and not one tent or item of rubbish was left behind! Compare that to your typical music festival camping aftermath, and you realise they might be on to something there.

Everyone’s least favourite aspect of music festivals: the toilets. In the past, and to this day at some festivals, all of the toilets are chemical – meaning they are far from environmentally friendly, and are adding to landfill. However, some festivals are moving towards more sensible options, with Glastonbury banishing chemical loos forever (save 150) in favour of eco-friendly long-drop toilets and compost loos, the results of which are later spread on farms to help crops grow.

Glastonbury Festival has just been fined in court for causing pollution during last year’s festivities, due to a human sewage leak, which ran into the nearby waterways and killed over 40 fish – some of which were very rare. Perhaps the move to long drop and compost loos will stop any repeats of this incident.

Are attempts to be more environmentally friendly working?

Some festivals are doing extraordinarily well at keeping waste to a minimum, minimising their environmental impact, and leaving no trace after the event. Others, not so well. Take Latitude Festival for example: this festival created 157 tonnes of landfill waste in 2014 and 43 tonnes of recycled waste. As you can see in the chart below, that is really not good! The most concerning thing about these figures is, Latitide have a green policy in place which involves handing out clear bags to all party-goers for their recyclables, a cup deposit scheme, and entry to a prize draw for those returning a bag of waste to their waste points. Whilst in 2014 they did improve on 2013’s efforts, more needs to be done. 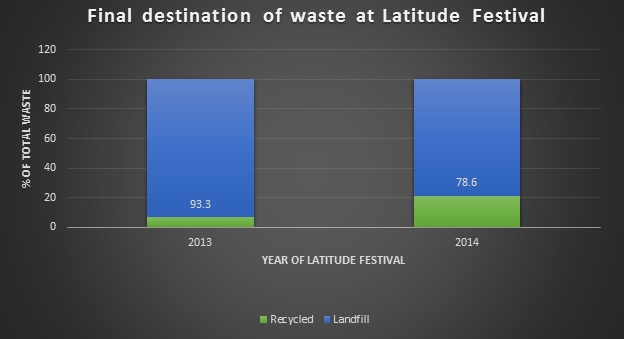 What’s the key to environmental success?

Aside from cancelling all our music festivals, which isn’t an option, how can we make them as environmentally friendly as possible, cut their waste production, and cut their carbon footprints? Mike of Acoustic Festival, which runs 75% of the festival on solar energy and recycles all their waste, says their environmental success is down to “attract[ing] a green and tidy ethos/person who all do their bit”.

Some green initiatives which, according to our research, seem to work well at reducing waste and litter at music festivals include:

Of course, there are many other environmental aspects to take into account with music festivals, including carbon footprints, and the lasting impact on the land used.

However, it is great that the green impact of music festivals is being considered nowadays – for so long, it was ignored by most festivals and attendees. The reduction of waste production is key, as opposed to just recycling as much as possible: prevention, as they say, is so much better than a ‘cure’. I look forward to seeing what new initiatives are trialed in the future, and hope to see a real focus on waste reduction.